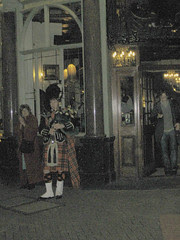 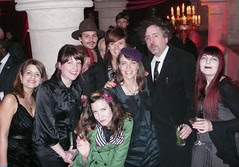 That's me on the right. That's a raspberry martini I'm drinking. Do not ask how many that was.

Posted by Alys Sterling at 3:02 PM No comments:

Really, go see this. It's good.

I was lucky enough to be at the Leicester Square premiere last night, though I had already seen it over Christmas, and it's just as good the second time round, except for the part where you know it's about to end, and you don't want it to.

Yes, there were meat pies at the party afterward.

Yes, I met Johnny Depp. And he was charming, and smiled, and I managed not to say anything stupid. (The first time I met Tim Burton, I did say something stupid, but he claims not to remember.)

And I met Alan Rickman, but did not quite dare say "By Grabthor's Hammer". And Timothy Spall is not at all villainous in person, despite being so good at playing them. And the raspberry martinis were perhaps a little too tasty, in that I really shouldn't have had quite so many of them...
Posted by Alys Sterling at 3:59 PM No comments: