Some of you lucky people will have gotten to play the original Katamari Damacy, but they never released it over here in the UK, so we've had to wait for the sequel to come out. So I've actually been waiting over a year to play this game. It does not disappoint. In fact, it's my new favourite game. The surreal dialogue! The trippy graphics! The weird sense of satisfaction when you get big enough to pick up the elephant with the apple on its back!

Also, Trev went out and searched half the game stores in London for it on Saturday as a surprise, because he thought I needed cheering up. I have the best husband in the world.
Posted by Alys Sterling at 12:42 PM 1 comment:

Have Spaceman Will Travel 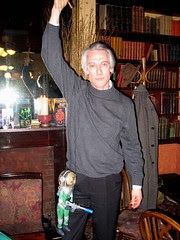 Steve Cockayne was February's guest at the BSFA night. He brought along some of the marionettes from the show his family used to run. Some of his characters are based on the marionettes, but not this particular one, which he just brought to show us 'cause it's cool.

It really is cool. The head moves around independently inside the helmet, and he can do a quick-draw on the laser pistol. And there used to be a set of little flying saucers which went with him, but there's only one left now.

Steve also knows a lot about scaffolding, from his days working as a BBC photographer. He worked, among other things, on Dr. Who, including some of my favourite episodes - late Tom Baker stuff, and early Peter Davison. (Though he says he was junior enough then for his memories of it to be mainly crawling around repairing cables.)

He also writes pretty cool books. (Seriously - good enough that I actually read the third book of a trilogy first, because that was all the library had. And I never do that, but I couldn't put it down.)

Posted by Alys Sterling at 5:37 PM No comments: