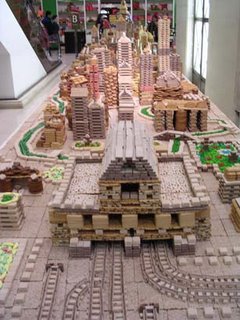 As part of China in London month, Selfridges commissioned the building of an entire biscuit city in their basement. I went to see it under construction on Saturday, when the Imperial Palace bit was finished, and the rest was still being built. I wish I had been able to get down there to see the finished city and photograph it for myself, but the Erudite Baboon has done a really excellent job. Check it out.
Posted by Alys Sterling at 5:41 PM No comments:

I got there too late to see the finished city, but just in time to bag a few souvenir biscuts.

Posted by Alys Sterling at 5:34 PM No comments:

Some people filled entire shopping bags. I just took a few home for tea. The chocolate wafer ones turned out to be very stale, almost inedible (nothing chocolate is ever entirely inedible, right?) but the caramel-sided ones were yummy.

Posted by Alys Sterling at 5:33 PM No comments:

You have no idea how much I want one of these .

Really. Go look. Click the play button. Remind yourself to close your mouth.
Posted by Alys Sterling at 3:10 PM 1 comment:

Only One Stuck Around To Be Photographed

Very early Friday morning, I kept hearing unhappy fox-noises. It woke me up twice - in case you've never heard foxes, they sound like a cross between a siamese cat yowling and a baby being tortured. This sounded even worse; seemed like something had really upset the fox.

Then, when it had gotten light out, I heard them again. Yes, not one but two foxes, snarling at one another on the roof of the garages out back. One of them jumped down and lit out across the neighbours' back garden as I got to the window, but the other stuck around long enough to pose for photos.

I have no idea how they got up there.