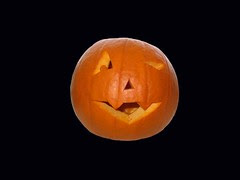 jack
Originally uploaded by Flyingsquid.
Posted by Alys Sterling at 2:20 PM No comments: 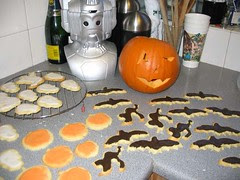 I don't usually like cooking, but this year I did something I've always wanted to do and made iced sugar-cookies for Halloween. Boy, are they sweet. So sweet they make your cheeks hurt when you bite into one. Maybe that's why Mom was never into icing them when I was a kid.

The icing was fun though. To get the black, I thought I could just mix some of each of the four food-colours in my set - blue, red, green, yellow - well I did the white, then made the rest orange, then thought it would be easy to add a bit of green and get brown. What I got, no matter how I tried, were various shades of vile green which would have been ideal if I'd been making iced zombies. Then I had the genius idea (if I do say so myself) of adding cocoa powder. Result: perfect colour. And the black cookies will make you even more hyper than the other ones!

They are presided over by Jack, who I carved earlier. The Cyberman is just always there though. 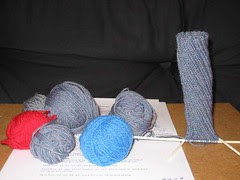 they're awed
Originally uploaded by Flyingsquid.

See how the little fluffy creatures worship their idol. If they are good, one day they too will get to be knitting...

This week, I have been learning to knit on double-pointed needles. I'd never tried it before, but in the bundle of knitting needles passed on from my grandmother to my mother to me there are several sizes of double-point sets. And I'm still feeling bitten by the knitting bug. So I searched around on-line until I found some advice on knitty.com and socknitters.com and found a pattern for fingerless gloves, which the onset of fall weather has reminded me that I need, and set to.

I believe the interesting spiral-effect in the towering idol is due to my having got the stitches twisted when arranging them after casting on. It's pretty cool how the knitting stands up all on its own.

Yesterday I went to the Knitting and Stitching show at Alexandra Palace. It was very hot inside. I ran into another quilter I know, and she said to me "why do we do this every year?" And I found it difficult to answer, except that last year I didn't go, and really felt like I'd missed something. This year it felt more like a trade-show than an art exhibition. In addition to the main trade-hall, half or more of the exhibition hall was occupied by people selling things. I came out feeling as though I'd been on an airplane - something was wrong with the air pressure in there.

Notwithstanding all of the above, I came out psyched to do more art. I saw beautiful and inspirational objects, and spent far too much money, some of it on what I am convinced is the perfect knitting pattern for all that wool I bought back when I worked in a haberdashery* shop and could get it at a discount. (The pattern I bought for it two years ago having turned out not to be the perfect one after all.) I got it home and discovered I'm missing the two sizes of needles I need to knit it on. These are probably the only sizes in the world I don't actually own.

I really liked mariko tagawa's little creatures. I also spent ages drooling over Claire Johnson Knight's sketchbooks, but a quick google hasn't revealed any of her art or embroidery on the net.

*For those of you in the States, haberdashery here is not menswear, but fabric and sewing-related items.
Posted by Alys Sterling at 12:11 PM No comments:

Last night, I finally made it to one of Pat Cadigan's readings at Borders. The guests were Cory Doctorow and John Courtnay Grimwood. It was all interesting, but for me the high point was the bit where Pat admitted to projectile vomiting her novels onto an unsuspecting world, while Cory claimed his just oozed out from under his door.

This was during a discussion of how Cory likes to publish beta versions of his novels in serial form on the net, whereas neither Pat nor John could ever imagine doing such a thing. Later, down the pub, I wanted to make a profound point about how this may not be so much a difference in willingness to let unfinished drafts be read as a difference in perception of the net, but the woman next to me spilled her drink all over the table, and by the time it got mopped up, the conversation had turned to other things.

It seems to me that some people (Cory, for instance) regard the net as a community of largely like-minded people, most (though spectacularly not all) of whom are well-intentioned and intelligent. So that for him, putting writing on the net is not all that different from showing it to his friends. He just has a lot of friends. Whereas others (Pat and John) regard the net as a thing used by people who are mostly strangers, of the sort one wants only to see one's best work, lest they judge you by something you yourself are not yet happy with. I haven't yet figured out where I stand on this.

In other news, it's a good thing I remembered my camera the other day. This morning, walking across the Heath, I found they had taken the table down and were about to go to work dismantling the chair, with a large crane and a camera crew in attendance.
Posted by Alys Sterling at 12:46 PM 2 comments:

Photoshop Is Not Involved This appeared last spring. (I've been meaning to blog about it for ages but have only just got round to taking a picture.)It sits just past the steep bit of Parliament Hill, on Hampstead Heath. For scale, there is a person (who just handily happened to be standing there) at the right of the photo - you may need to click and look at the full-size version to see.

Teenagers are reputed to have been caught having sex on the table-top. What I want to know is: how did they get up there?

Also, it looks OK, in a surreal sort of way, in my photographs. In person, it's hideous, and spoils one of my favourite views. I believe it's not a permanent addition, though.

Posted by Alys Sterling at 12:27 PM No comments: