Back From the Dead

Posted by Alys Sterling at 11:50 AM No comments:

Back, new and improved, with Poppets 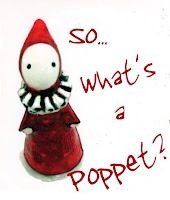 What We Know About Poppets

Because Poppets improve everything.
Posted by Alys Sterling at 3:32 PM No comments:

What happens if a bunch of fast-motion camera science geeks from Imperial College give you a water balloon and tell you to hold your hand just there while they count to three?

It 'splodes on the count of two, and you get a bit wet. And then they give you a copy on disk so all your friends can see! "Your hand moved really fast when it went," the guy on the camera said.

Also there were nematodes, having their neurons analysed, with the aid of glow-in-the-dark jellyfish genes engineered in - poke the worm and the neuron which responds to poking will glow, how cool is that? (That's only a tiny tiny bit simplified. And they had live nematodes under a microscope to demonstrate with!) Apparently nematodes, by virtue of not having very many neurons, and also being transparent, make ideal test subjects...


I love the Royal Society science fair.
Posted by Alys Sterling at 10:53 PM No comments:

Great films, weird films, and films you'd never get to see anywhere else - for me, the highlight was seeing Wizard of Oz on the big screen! And apparently I still have no trouble staying up all night, especially when watching films is involved...

Dragon Hunters is really good - it's French, 3-D modelled animation, but the plot and characters are like something from Studio Ghibli. I loved everything about this film, but especially the part where, instead of putting in jokes for the adults in the audience, they'd put in something kids would laugh at where you'd expect the adult joke - for me, this made it even funnier. My inner ten-year-old is never that far from the surface, though!

If you liked Shaun of the Dead, then Wasting Away is even funnier, and the first film to show what it's like being a zombie from the zombie's point of view. It's a new genre - Zombie Comedy Romance. Is that ZomRomCom? To go along with that, there's Netherbeast, which is VampRomCom, with a touch of The Office. Recommended as a double feature!

Also hilarious was Dai Nipponjin, not likely to be coming to a theatre near you, but you never know - it's a Japanese fake documentary about "Big Man Japan", a monster-fighting superhero who can grow to Godzilla-size with the application of electricity - except he's not very popular (due to all the incidental property damage, and not being a very good fighter, and so on) and kind of a loser, and he's got this interviewer with a camera following him around. It's the weirdest Japanese film I've ever seen, and believe me, that's weird. See it if you can, but brace for weirdness!

On the anime front, I missed the new Appleseed (kind of on purpose, since I really love the old traditionally-drawn version). Girl Who Leaped Through Time is what I think of as traditional, but a good story - the sort of thing I'd get the DVD of for my just-gone-teenage nieces. Tekkon Kinkreet I had to miss half of due to desk duty, which means I'll have to get the DVD myself when it comes out to see how it ends, though I think I would anyway. It was a bit of a strange choice for the third film of an all-nighter, since it's very slow-moving, and the story is convoluted, but the artwork is interesting and sometimes beautiful, and really, I can't wait to see it all the way through. Vexille is gorgeous, with the most doom-laden (for Japan, anyway) plot I've yet encountered, in the tradition of doomed-Japan storylines. And it has sand-worms made of junk. What more could you want?

And to complete my screening list: La Antena is atmospheric and strange, though not what I was expecting from the billing, which was Metropolis-meets-Tim-Burton; for me it was more a collision of early fantasy, like Cocteau's Beauty and the Beast, Surrealist films like Le Chien Andalou, and film noir. Chrysalis was also not what I expected - the trailer, screened with an earlier film, made it look more like Hollywood's interpretation of Philip K. Dick, whereas it's actually a French future-noir.

There were also some most excellent shorts screened - they show one for every film, which I really like. One of these was a surprise screening of a Joker-altered Dark Knight trailer, and all I can say is I can't wait!
Posted by Alys Sterling at 2:45 PM No comments:

I Can Haz Posse 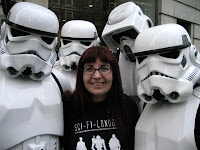 You know how it goes. When you're doing loads of interesting stuff, there's no time to blog. And when there's finally time, there's a backlog. So I haven't blogged about New York, or the gig in Madrid, in fact, I haven't even had time to look at my own photos.

For now, here's one of me from yesterday, hanging out with some new friends. If you happen to be in London next week, check out the SciFi London Film Festival. I'm volunteering (hence the t-shirt), so you might see me there!

Meanwhile, from the department of you-can't-make-this-stuff-up, Wednesday evening, on my way home from work, I passed a woman walking the breed of dog I think is called a pug (sort of a brick in cream fur, pushed-in face, cute in an ugly sort of way). Nothing unusual there, except the dog had on a pearl necklace. Really. I am not making this up.
Posted by Alys Sterling at 4:28 PM No comments:

A Different Kind of Pole Dancing

This was part of the real Chinese New Year celebrations, on the 7th, in London Chinatown. I'd seen it done in a Jackie Chan film, but never for real. They did have crash mats underneath! At the end, the lion is going for the bok choi tied to the pillar just underneath the little tiny platform it's standing on.

And now I feel the year has started. I think the Year of the Rat is going to be a lot of fun, though filled with big changes - but good ones!
Posted by Alys Sterling at 12:50 PM No comments: